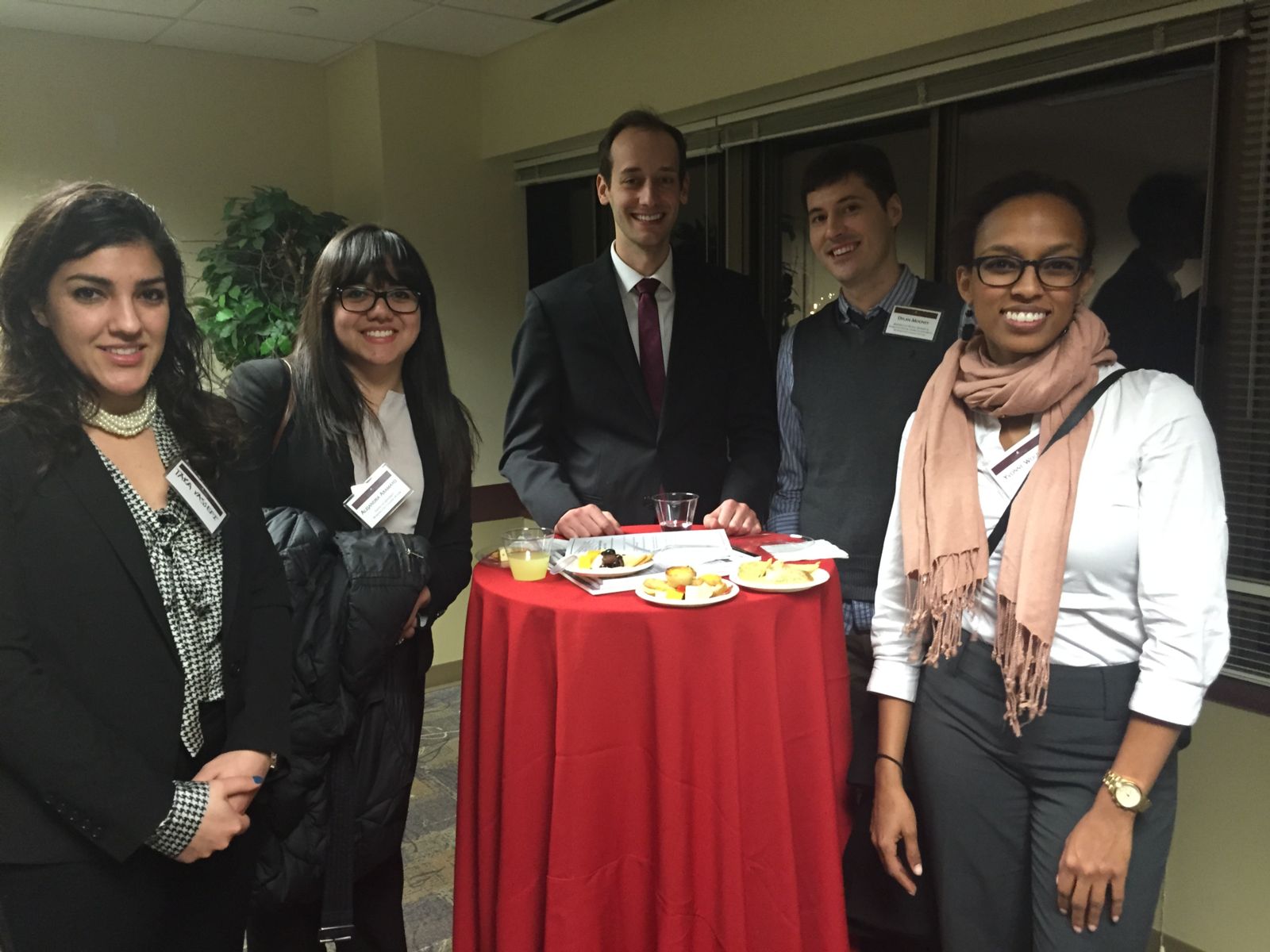 AUWCL students and alumni were recognized for sharing their thoughts and ideas through publication during the 10th Annual Student Author Reception, hosted by the Pence Law Library.

Many student honorees discussed their publications and shared about their writing process.

“It’s a true honor to be recognized for the research and writing skills that we hone at Washington College of Law,” said Kaine Hampton, a 3L who has two articles being published this spring.

John Palfrey, author of BiblioTech: Why Libraries Matter More Than Ever in the Age of Google, gave the keynote address. In his remarks, Palfrey discussed the importance of libraries and the ways libraries transform to keep up with the age of technology.

“No matter what we build digitally people will still go to libraries,” said Palfrey.

Palfrey praised the student authors for the work that they have done to share their scholarship with others.

"This was truly a landmark event for the Pence Law Library--ten years of student scholarship," said Billie Jo Kaufman, associate dean for library and information resources. "To have the honor and privilege to work with such bright, engaged, and talented students makes the work of the library faculty and staff so worthwhile.  We know these efforts will have impact on the academic marketplace of ideas. Mr. Palfrey spoke about the 'stories' that influence your writing--each one of our student authors has their own personal story about their hard work.  To see the effort in print with the ability to influence the conversation is so rewarding."

Adam Arnold - The Quest for Sustainable Energy: Germany’s Nuclear Scrutiny vs. “All of the Above”, Sustainable Development Law and Policy

Sara Bennett - Unpatentability by Design: The Overlooked Use of Inter Partes and Post-Grant Review to Challenge Design Patents, Journal of the Patent and Trademark Office Society

Leigh Colihan - Child’s Play:  The Case Against the Department of Labor for Its Failure to Protect Children Working on America's Tobacco Farms

Hunter Deeley - The Expanding Reach of the Executive in Foreign Direct Investment:  How Ralls v. CFIUS Will Alter the FDI Landscape in the United States, American University Business Law Review

Alexandra El-Bayeh - They Could Be Back: The Possibility of Termination Rights for Session Musicians, American University Law Review

Christa Elliott - Terror in the Press: How the U.K.’s Threatened Criminalization of The Guardian Under the Terrorism Act 2000 Would Violation Article 10 of the European Convention on Human Rights, American University International Law Review

Benjamin A. Genn - What Comes Off, Comes Back to Burn:  Revenge Pornography as the Hot New Flame and How it Applies to the First Amendment and Privacy Law, American University Journal of Gender, Social Policy and the Law

Bantayehu D. Gezahegn - The International Criminal Court and the African Union: A Deadlock where Power Politics Paralyzes International Law; Ebola Outbreak in West Africa and the Extraterritorial Obligation of States to Cooperate in Responding to International Health Emergencies; and Syria Debrief: What is Next?, Human Rights Brief

Ashley E. Green - Red Touches Black:  The First Application of Maker’s Mark and Louboutin in the Context of Color Trademarks, American University Journal of Gender Social Policy and the Law

At the Crossroads: The Intersection of Synchronization Licensing and Musician Advocacy, University of Denver Sports and Entertainment Law Journal

Kayci Hines - An Analysis of the Federal Income Tax Issues Associated with the Residential Value of Solar Tariff, Arizona Journal of Environmental Law and Policy

Breanne Hoke - My Online Me: Why Gamers Should Turn to California Right of Publicity Laws in Protecting Their Online Avatars, American University Intellectual Property Brief

John A. Howes, Jr. - A Fluid Situation: On the Role of Interstate Water Commissions in Fracking Policy, Administrative Law Review

Stephanie Kurose - Requiring the Use of Tracers in Hydraulic Fracturing Fluid to Trace Alleged Contamination, Sustainable Development Law and Policy

Dylan Mooney - To Pay or Not to Pay:  Interpretation of § 302 of the Labor Management Relations Act as Evidenced by Titan Tire, American University Business Law Review

Jacqueline Morley - The Unfettered Expansion of Appropriation Art Protection by the Fair Use Doctrine: Searching for Transformativeness in Cariou v. Prince and Beyond, IDEA

Robert Nothdurft, Jr. - The ‘Rhyme or Reason’ Behind Prosecutorial Use of Rap Lyrics as Evidence in Criminal Trials, Criminal Law Practitioner

Behind the Procedural Curtain: Victim Anonymity and Witness Protection in the Special Tribunal for Lebanon, Eyes on the International Criminal Court

Emma Burgess Roy - Cruelty On Your Plate: The Misadministration of the Humane Methods of Slaughter Act, Mid-Atlantic Journal on Law and Public Policy

Sarah Shulman - The Criminalization of Bribery: Can the Foreign Corrupt Practices Acts Be Applicable to the Anti-Bribery Provisions of the United States Convention Against Corruption?, American University International Law Review

Nick Thies - London Calling to the Underground: Waste Heat in Urban Morphology Is Going down the Tube, Sustainable Development Law and Policy

Katrina Tomecek - Mexican Energy Revolution: But Is It a Solution?,  Sustainable Development Law and Policy

Nancy Turner - The Young and the Restless: How the Twenty-Sixth Amendment Could Play a Role in the Current Debate over Voting Laws, American University Law Review

Jack Vidovich - I want to Be a Non-Producer: Copyright Non-Practicing Entities and the Group Registration Process for Photographs, Administrative Law Review

Yvonne Woldeab - “Americans: We Love You, But We Can't Afford You”: How the Costly U.S.-Canada FATCA Agreement Permits Discrimination of Americans in Violation of International Law, American University International Law Review