American University Washington College of Law in the Media 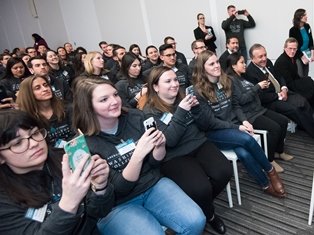 The Hill – Professor Amanda Frost elaborates on how the Courts can and should look to the context in which the new executive order on immigration was created to determine whether it is Constitutional. MORE

The Nation – Professor Herman Schwartz writes about how he believes President Trump’s immigration policies will hurt the U.S. economy. MORE

VOA –Professor Jayesh Rathod weighs in on how the government typically will not appeal the waiver of an immigration judge. MORE

VICE News – Professor Steve Wermiel speaks about why the Supreme Court avoided hearing some of the bigger cases this term. MORE

Bloomberg BNA – Associate Professor Jennifer Daskal says if Sessions continues to promote encryption backdoors, he may face backlash from both the political and private sector. MORE

Foreign Policy– Professor Rebecca Hamilton discusses how this is the optimal point for the International Criminal Court to investigate Australian officials for their alleged involvement in enabling crimes against humanity. MORE

The Morning Call – Professor Steve Wermiel provides insight on why the Trump administration will have to set priorities when dealing with legal marijuana in states such as Pennsylvania. MORE

Just Security – Professor Rebecca Hamilton explained why President Trump’s immigration ban is not the same as the designation of those seven countries as “countries of concern” under the Obama administration. MORE

Talking Points Memo – Professor Steve Wermiel articulated how President Trump's immigration ban is not likely to be struck down on the grounds of religious discrimination.  MORE

Solitary Watch – Professor Juan Mendez reflects on his time as the UN Special Rapporteur on Torture and other Cruel, Inhuman or Degrading Treatment or Punishment after 6 years in the position. MORE

The Undefeated – Professor Jeremi Duru explained how the recent appointments of African American head coaches in the NFL indicates an important change. MORE

Greenwire – Professor Dan Metcalfe commented on how Senator Sessions stalled FOIA reform, as well as the impact he is likely to have on public records law as Attorney General. MORE

New Republic – Professor Jenny Roberts discussed the profound effects marijuana arrests or convictions have on individuals, in light of the recent push for amnesty with the drug. MORE